Zoledronic acid injection is indicated for treatment of Paget's disease of bone in men and women. Treatment is indicated in patients with Paget`s disease of bone with elevations in serum alkaline phosphatase of two times or higher than the upper limit of the age-specific normal reference range, or those who are symptomatic, or those at risk for complications from their disease.

Osteoclastic hyperactivity resulting in excessive bone resorption is the underlying pathophysiologic derangement in hypercalcemia of malignancy (HCM, tumor-induced hypercalcemia) and metastatic bone disease. Excessive release of calcium into the blood as bone is resorbed results in polyuria and gastrointestinal disturbances, with progressive dehydration and decreasing glomerular filtration rate. This, in turn, results in increased renal resorption of calcium, setting up a cycle of worsening systemic hypercalcemia. Reducing excessive bone resorption and maintaining adequate fluid administration are, therefore, essential to the management of hypercalcemia of malignancy.

Patients who have hypercalcemia of malignancy can generally be divided into two groups according to the pathophysiologic mechanism involved: humoral hypercalcemia and hypercalcemia due to tumor invasion of bone. In humoral hypercalcemia, osteoclasts are activated and bone resorption is stimulated by factors such as parathyroid hormone-related protein, which are elaborated by the tumor and circulate systemically. Humoral hypercalcemia usually occurs in squamous cell malignancies of the lung or head and neck or in genitourinary tumors such as renal cell carcinoma or ovarian cancer. Skeletal metastases may be absent or minimal in these patients.

Extensive invasion of bone by tumor cells can also result in hypercalcemia due to local tumor products that stimulate bone resorption by osteoclasts. Tumors commonly associated with locally mediated hypercalcemia include breast cancer and multiple myeloma.

Total serum calcium levels in patients who have hypercalcemia of malignancy may not reflect the severity of hypercalcemia, since concomitant hypoalbuminemia is commonly present. Ideally, ionized calcium levels should be used to diagnose and follow hypercalcemic conditions; however, these are not commonly or rapidly available in many clinical situations. Therefore, adjustment of the total serum calcium value for differences in albumin levels (corrected serum calcium, CSC) is often used in place of measurement of ionized calcium; several nomograms are in use for this type of calculation [see DOSAGE AND ADMINISTRATION (2)].

Pharmacokinetic data in patients with hypercalcemia are not available.

In vitro, the plasma protein binding is low, with the unbound fraction ranging from 60% at 2 ng/mL to 77% at 2000 ng/mL of zoledronic acid.

Zoledronic acid does not inhibit human P450 enzymes in vitro. Zoledronic acid does not undergo biotransformation in vivo. In animal studies, less than 3% of the administered intravenous dose was found in the feces, with the balance either recovered in the urine or taken up by bone, indicating that the drug is eliminated intact via the kidney. Following an intravenous dose of 20 nCi 14C-zoledronic acid in a patient with cancer and bone metastases, only a single radioactive species with chromatographic properties identical to those of parent drug was recovered in urine, which suggests that zoledronic acid is not metabolized.

In 64 patients with cancer and bone metastases, on average (± s.d.) 39 ± 16% of the administered zoledronic acid dose was recovered in the urine within 24 hours, with only trace amounts of drug found in urine post-Day 2. The cumulative percent of drug excreted in the urine over 0 to 24 hours was independent of dose. The balance of drug not recovered in urine over 0 to 24 hours, representing drug presumably bound to bone, is slowly released back into the systemic circulation, giving rise to the observed prolonged low plasma concentrations. The 0 to 24 hour renal clearance of zoledronic acid was 3.7 ± 2 L/h.

Zoledronic acid clearance was independent of dose but dependent upon the patient's creatinine clearance. In a study in patients with cancer and bone metastases, increasing the infusion time of a 4-mg dose of zoledronic acid from 5 minutes (n=5) to 15 minutes (n=7) resulted in a 34% decrease in the zoledronic acid concentration at the end of the infusion ([mean ± SD] 403 ± 118 ng/mL versus 264 ± 86 ng/mL) and a 10% increase in the total AUC (378 ± 116 ng x h/mL versus 420 ± 218 ng x h/mL). The difference between the AUC means was not statistically significant.

Zoledronic acid injection is not indicated for use in children [see PEDIATRIC USE (8.4)].

The pharmacokinetics of zoledronic acid were not affected by age in patients with cancer and bone metastases who ranged in age from 38 years to 84 years.

Population pharmacokinetic analyses did not indicate any differences in pharmacokinetics among Japanese and North American (Caucasian and African American) patients with cancer and bone metastases.

No clinical studies were conducted to evaluate the effect of hepatic impairment on the pharmacokinetics of zoledronic acid. 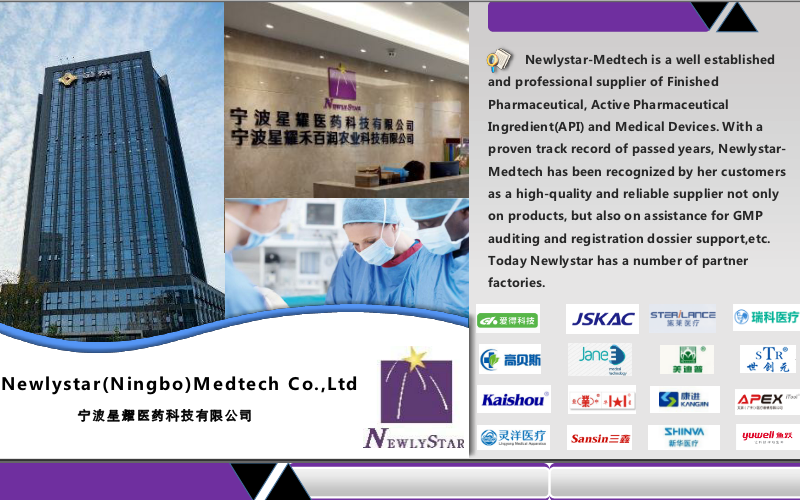 Newlystar-Medtech is a well established and professional supplier of Finished Pharmaceutical, Active

Pharmaceutical Ingredient(API) and Medical Devices. With a proven track record of passed years,

only on products, but also on assistance for audit and improvement of GMP level, quality management

The essence of Newlystar-Medtech's activites, is a commitment to her customers with professional

service and high-quality products with effective cost and innovative solutions.

All pharmacists work in Newlystar-Medtech like a bridge link the customers and Chinese manufacturers,

especially, their professional working is to make the formulation manufacturers who is familiar with

Chinese Pharmacopoeia to understand well the international requirement,to ensure the success of

partners in China, enable Newlystar-Medtech to provide her customers with a wide range and high-tech

products, best services and capabilities for their actions in tender, distributing and improvement in their